Do cats have feelings?

In popular culture, there is often a belief that cats are cold and distant animals, unlike our warm and affectionate dog friends. But is this real? Undoubtedly, if you are in your care or have had a feline. You will know that this statement is not true, since cats also feel a wide range of emotions and express affection in the most diverse ways.

Feelings and emotions of cats – Differences

When we refer to emotions, we usually refer to the field of psychology as a set of neurochemicals. And hormonal responses that predispose us to react in a certain way to a specific stimulus. For example, the sight of a snake can produce an immediate fear response for many animals (such as a mouse). This emotion would have been due to an activation of the limbic system as an adaptive response to the environment, in this case, to a stimulus that threatens the physical integrity of the individual.

Now, although many of these responses are instinctive, these emotional responses are also due to learning. In other words, the information that the brain assimilates about what we experience will affect how we will react once we experience it again. For example, if a dog was abused in the past, it is most likely that it has an emotional response of fear towards people. As it will have related them to the negative experience.

Now then what is a feeling? The answer to this question is simple, since similar to emotions, feelings are closely related to the limbic system. But these are distinguished in that they include the conscious evaluation that we make of the experience.

To understand it better, although both concepts have to do with the subjective way in which we experience a situation, emotions are basic and unidirectional. Since they appear immediately when the stimulus appears. Instead, feelings comprise a reflective and self-aware process. For example, you can be happy when you remember a memory that you have identified as happy or. See a snake and be able to analyze what you feel when seeing it, reflect on how rational it is to be afraid or disgusted, etc.

How do cats feel?

Now that we know the difference between emotion and feeling, it is easier to understand how cats feel. But to understand it, it is necessary to avoid using our human perspective of understanding the world and putting ourselves in the shoes of the cat, since we are animals with the ability to reflect on ourselves, which allows us to form a self-concept, distinguish ourselves from other individuals and feeling complex emotions such as guilt or shame.

We cannot, therefore, attribute this self-awareness to cats, since it has not been proven that they possess it and it can lead to mistakes, such as assuming that if you scold your cat, it can understand that it has done something wrong.

What does this mean? In the case of cats, these are purely emotional animals, which respond to different situations in the most appropriate way: they are afraid of stimuli that are perceived as dangerous or unknown, joy towards rewarding stimuli … For this reason, we cannot say that cats have feelings as such, but live in the here and now and do not need to reflect on their own experiences, but learn from them. And, although the emotional responses are basic and immediate. They evolve over time based on the experiences acquired in different situations and in the face of different stimuli. In this way, it is not strange, for example, that a cat is afraid of dogs. But at the same time shows affection towards the dog with which he lives at home. Because the latter does not represent a threat to him and has created an emotional bond.

How do you know if your cat loves you? 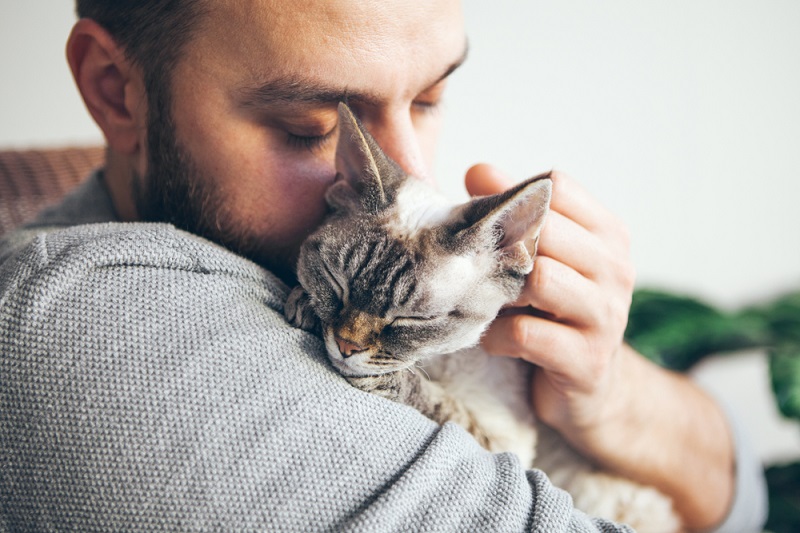 If you have a feline under your wing, you should not have any doubts about whether your cat loves you. Because he will surely love you. Cats are the most peculiar animals, which have a wide range of forms of communication with which to express how they feel, among them, they stand out for their way of expressing affection :

In fact, it is empirically proven that cats create an attachment bond with people, similar to how an infant would. We understand attachment as a biological behavior in which the cat perceives its human guardian. As its source of physical and affective security in the same way as its mother would since you are the one who provides care, food, shelter, and affection, key elements for their well-being, which generate positive emotions that they associate with you.

Therefore, despite the fact that cats are rather temperamental animals and with less reason than us. This is not an impediment to feeling affection towards other individuals. We must not forget that cats are social animals. Despite the reputation as an antisocial and independent animal that is often attributed to them, and that, therefore, they need other individuals to survive. For this reason, feeling and expressing affection is of vital importance for our little friend.