Bryonia alba: what is it and when is it used?

Bryonia Alba is a well-known homeopathic remedy that is obtained from the roots of the homonymous plant, native to central, southern, and eastern Europe. It belongs to the cucurbit family, climbing plants with tendrils. It can be recognized by its pentagonal-shaped leaves with pointed tips, greenish-white flowers, and fleshy blackberries.

Although the fruits of Bryonia Alba are toxic, traditional medicine has always used the root for therapeutic purposes. Let’s see what are the main uses and possible side effects.

What benefits are attributed to Bryonia Alba?

The active ingredients of “white bryony”, as it is also called, give it various medicinal properties. Let’s see in detail what they are and on what occasions they can help.

Bryonia Alba is considered an emetic, that is, a remedy capable of inducing vomiting. It can also act as a diuretic by stimulating the elimination of water and electrolytes through the urine.

In general, despite the lack of scientific evidence, according to popular literature, Bryonia helps in the following cases:

Many people use Bryonia Alba for its anti-inflammatory effects. It is often used to reduce joint pain and is in fact a common ingredient in rheumatoid arthritis and headache medications.

Its mechanism of action consists of the dilation of blood vessels, whose contraction is linked to migraines and various disorders. However, the scientific evidence relating to these properties is not yet decisive.

A study published in the British Journal of Clinical Pharmacology concluded that using a Bryonia and arnica extract had no effect on the inflammation and bleeding that can occur after heart surgery.

The active ingredients of Bryonia Bianca have been studied as adjuvants against cancer. Research published in the Journal of Natural Products has established that Bryonia Alba root extracts have anticancer potential. Not only do they reduce the risk of cancer, but they appear to inhibit the spread of cancer cells.

Another in vitro study published in Avicenna Journal of Phytomedicine identified cytotoxic effects in this plant; that is, it prevents the division and growth of cells, including cancer cells.

In this specific case, Bryonia has been shown to be effective against squamous cell carcinoma of the head and neck, as well as cervical cancer. However, human studies are needed to confirm this hypothesis.

Other benefits of Bryonia Alba

Bryonia Alba is considered a homeopathic remedy. Popular culture attributes many other benefits to it and considers it useful for treating:

Side effects and contraindications

It is important to know that berries should not be consumed, as they are very toxic. To be exact, they cause chronic conditions and even death.

Other parts of this plant can also be toxic, but they don’t have fatal consequences. Any dose could cause symptoms such as:

On the other hand, there is a lack of data on the effects in pregnant and lactating women. In this case, Bryonia Alba should only be taken after talking to the doctor.

Homeopathy establishes different doses depending on the condition to be treated.

Fever accompanied by sweating, intense thirst, and muscle aches. It is recommended to consume 5 granules of Bryonia Alba in 9 CH dilution (centesimal dilution) every 4 hours.

Arthritis. The established dose is 5 granules in a 5 CH dilution distributed in 2 doses per day for 10 days. However, in the case of acute synovitis, the dose should be taken every two hours.

Dry eye syndrome. It is recommended to take Bryonia Alba in a dilution of 5 CH, 6 times a day for three months.

Warning: dosages may vary depending on the pharmaceutical company. Therefore, you should always read the label and if in doubt, consult your homeopathic doctor or herbalist. It should not be taken in combination with other drugs because there is a risk of interaction.

The Bryonia Alba at a glance 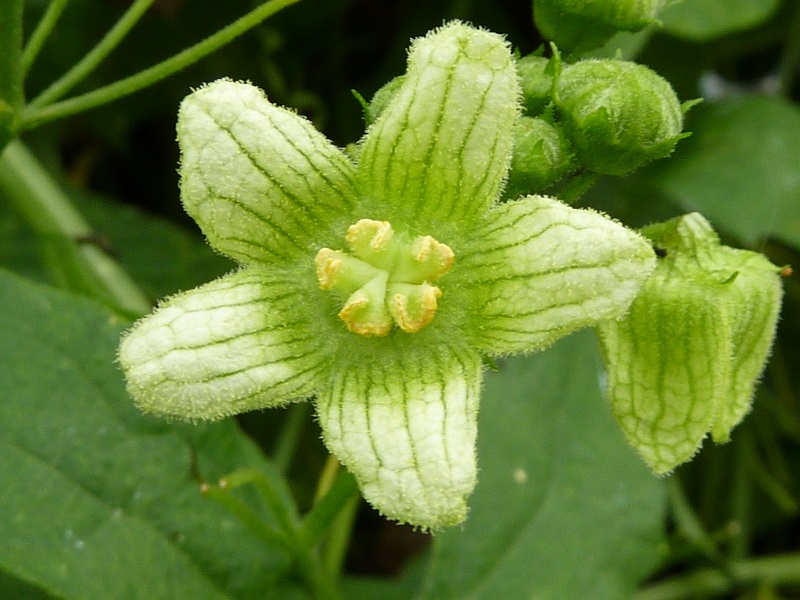 Bryonia Alba is a homeopathic medicine obtained from the roots of the homonymous plant. It is a climbing species native to the European continent with pointed pentagonal leaves, greenish-white flowers, black and poisonous berries.

As for its medicinal properties, it is thought to have anti-inflammatory and anti-cancer effects. It is also considered useful in the treatment of constipation, mumps, flu, arthritis, and dry eye syndrome.

Its use must always take place under medical supervision, given the high levels of toxicity. Berries can be deadly and consuming other parts of this plant in its various presentations, even in small quantities, can cause malaise and ailments.