Sick children– Most children will have to receive some type of medical assistance at some point in their childhood and there is no doubt that the child will have a bad time, but it can be even worse if the parents have feelings of guilt and anxiety. Sometimes some parents come to develop post-traumatic stress if their child is hurt.

Parents who said they were more anxious or more distressed were less able to support their child during the procedure. Which increased the child’s discomfort, measured by their ability to distract based on toys and conversations compared to crying or screaming during the procedure.

Our ability to concentrate is limited and we cannot worry about several things at once. If a child is entertained with other things. He will perceive the pain less intensely and that is why we believe that distractions are good for children during the bandage change.

The results of this research show that parents need additional support when their children are injured and during medical treatment, something that would benefit both parents and children. Less distressing treatment means less trauma for everyone and the child will have fewer anxiety problems during medical care.

Research also shows that less anxiety is related to faster healing of wounds in children. Which means less medical intervention and that children can return to school sooner.

No one likes to think about hurting their child. But it may be helpful to keep some tips in mind if it is necessary to take the child to the doctor, for the good of both parents and children. 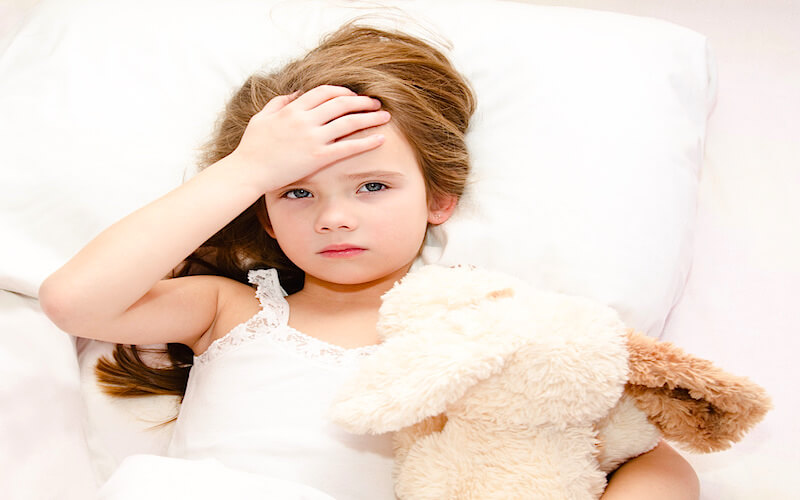 Distract the child from the beginning of the treatment.

It is normal for parents to feel bad if their children have been injured and need medical assistance. All parents have feelings of guilt. And have a bad time from time to time if it is about the health of their children. And they should not forget that they are doing their best when they take the children to the doctor.

We must not lose sight of the fact that the important thing is that the child is going to be helped and that it is useless to worry about the severity of the wound. If as a parent you are worried about how you will respond when the treatment arrives. You can be accompanied by another adult who also supports your child if you need a break.

The dangers of a spoiled child

Without hardly noticing, and without malicious intent, parents make the mistake of pleasing their children in most of their requests: “Mom, I want to see drawings”, “Dad, I do not want this sandwich of chorizo, I want it of cheese” , “I do not want to bathe today,” “Mom, today you do not give me a bottle, Dad gives it to me” … Totally, they are seemingly small details with which you avoid listening to their crying and tantrums, and you achieve a quieter coexistence in home.

Not to frustrate our sick children is to spoil them

However, access to all your requests, even if they seem insignificant, is more important in your development than, in principle, it may seem. The experts in psychology are clear: not to frustrate our children is to spoil them, turn them into spoiled.

Parents should keep in mind that if they always do what the child wants they are encouraging that in the future be an intolerant person, and will not know what it is to strive to achieve something.

In addition, the level of demand will increase as age advances and «the lollipop will go to the iPad, the bike, a week in the snow. If you do not get it, your degree of frustration will be so great that you will become aggressive. Because he has not learned to handle his frustrations or his emotions, and he does not know another way to achieve his goals. Therefore, we are contributing to our children being depressed adolescents.

Alfonso Ladron acknowledges that he receives in consultation many parents concerned about having sick children. However, some think that “why deny them things now, they argue that they will have time for others to deny them when they are older. This position is a very selfish act because they are not bringing the best education to your child. I give you the example of mathematics. According to their arguments, why teach them as children, they will learn them as adults. However, to learn to divide, first you have to know add, subtract, multiply … Well with frustration the same thing happens, you have to learn to react to it from very small, because if not tomorrow at school or in their work they will not know how to accept a no for an answer and they will be lost as people.

Parents must be consistent with what they ask

He adds that children learn from what they see their parents do which is why it is also positive that they see us as tolerant of our own frustrations. That is to say, if we had a bad day in the office, it is not convenient to be seen shouting and furious talking to the boss, or if we drop a plate we set up a scene. You have to be consistent with what we ask of you. If the child sees that his parents are upset. He will also enter into that dynamic of not accepting any setback, or doing it in a rabid way.

When the child does not accept a no, “he sets up a theater in which he seeks spectators. If he perceives that he does not succeed, he will stop acting like that.

Why do not we frustrate them?

The subsequent tantrum and the time it costs the child to assume their Frustration at not getting what you want. It is essential that both parents agree in front of the child when denying something. And never discuss the decisions made in front of the child. If they are unsafe or contradictory. The child will be reinforced in his behavior and insist on his attempt to convince one of the parties.

The main reason why we do not frustrate is, in the first place, the lack of time. In general, the father and mother work. And there is less time to be with the sick children and, as a compensation for this void. And sometimes a sense of guilt. They are rewarded with what they ask for. Also, since we are little together. It is better to be in a quiet environment. So it is more convenient to give them what they want to be quiet. Nor should we forget that there are more and more separated parents. Or children who are with their grandparents and who fill them with whims.