Multiple Intelligences: The importance of individual differences in performance

The study of intelligence has many aspects; one of them is pursuing describe the structure of this psychological attribute, which is primarily responsible for individual differences in cognitive performance. Since the pioneering work of FJ Galton, A. Binet, Ch Spearman or LL Thurstone, have developed a series of models and theories have revolved around a dichotomy considered that intelligence had a unitary structure or a multiple structure proposed. Throughout the century this debate has been opened, and only recently there seems to be a rapprochement between the two positions.

This approach aims to combine the idea of an intelligence complex, hierarchically organized, diversified primary levels of the same and with a unique capacity on the upper level known as factor general intelligence or “g”. This proposal, systematized by JB Carroll in 1993, seems to have satisfied most modern researchers and has received the almost unanimous support of specialists. But despite this agreement remain alternative models; one of these models continues to defend a multiple structure of intelligence is that of Howard Gardner and is called the theory of multiple intelligences (MI).

This author does not agree with a model that considers the intelligence of a hierarchical and unitary, nor the implications of this model in the field of measurement of intelligence, especially with IQ tests. The MI theory was proposed in 1983 and in recent years has gained importance, especially in education and schools. In this article we describe this theory, its strengths and weaknesses in the context of modern psychology of intelligence points. 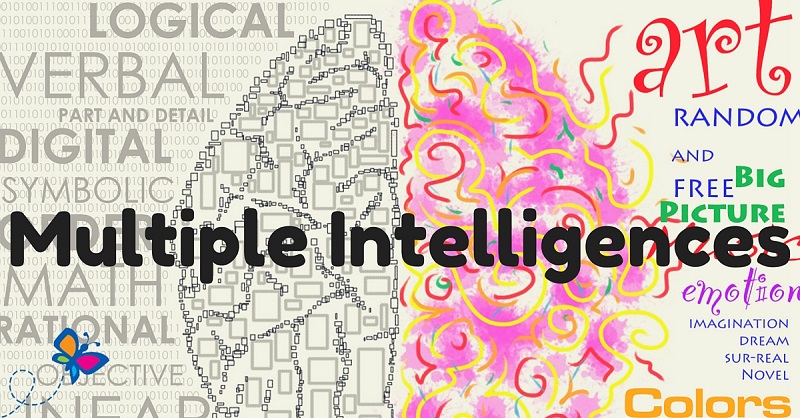 These intelligences were defined from the study of a variety of skills or cognitive skills identified in populations of particular subjects: talented individuals, sequelae of brain injury, developmental and transcultural observations. For the observed skills receive the label of intelligences had to meet the above criteria. In 1983 he proposed seven intelligences that are summarized below…

We could describe in more detail each of these intelligences but it is more appropriate to follow the approach that Gardner himself illustrated by examples of characters who have stood out for having one of them in an extraordinary level.

These examples match personalities from the arts, science or politics directly and illustrate the meaning Gardner gives each of these intelligences. A model of linguistic intelligence would find in writers like Jorge Luis Borges or Torrente Ballester, of logical-mathematical intelligence in A. Einstein and Linus Pauling (Nobel Prize in Chemistry), the musical in L. Bernstein and Stravinsky, the kinesthetic-corporal in Nureyev, interpersonal in S. Freud and intrapersonal in M. Gandhi or Mother Teresa.

In the words of H. Gardner: “The MI theory is an effort to justify broadly the concept of intelligence in the broadest possible current scientific knowledge, aims to provide a set of tools for educators that help the development of individual potential, and I think applied properly can help all individuals achieve the maximum development of their potential in both professional and private life “(Gardner, 1998). In fact, this theory includes the intelligence available to human individuals are not necessarily dependent between them is more: these intelligences can operate in isolation according to the requirements of the tasks.

Each person has a different number or extent each of these intelligences, but the way it combines or mixture generates multiple forms individualized intelligent behavior, something like what happens with the combination of facial features that give rise to faces or individual faces. Gardner proposes that each person will stabilize ways to mix these intelligences acquiring a personal idiosyncrasy (something like a personality in the cognitive sphere). This is very evident in schools where, despite the desire to amalgamate educational techniques in uniform systems, students seem to resist this educational activity daily showing their individuality in modes of learning. In addition, Gardner insists, these “styles and personal preferences” seem very stable, as if they had set in early periods of child development, being therefore very resistant to change. Self Gardner says: “Neither monozygotic twins (or even clones) have the same amalgam of intelligences. Individuals develop, from their unique experiences, profiles of idiosyncratic intelligence, specific to each person “(Gardner, 1998).

It is important to note that the intelligences proposed by Gardner have not been identified from factorial studies, as has happened with proposals Thurstone or Guilford. Gardner proposes their minds from the convergence of mental operations, from the union of empirical evidence from neuroscience, cognitive science, developmental processes of different skills in childhood and in exceptional subjects and also mentally handicapped. Thus, approaches and methods Gardner are more complex and extensive than those of traditional models of intelligence and we must classify them as “rational” models even though he call empirical, since their model has not been proven empirically, in a strict sense, since it does not have rigorous systems of measurement of these intelligences and therefore you cannot compare their predictions, at least in the field of quantitative research in this field it is of great importance.

Interestingly, many psychologists have criticized this proposal Gardner, and instead, many educators consider very appropriate. Possibly MI theory is consistent with many observations and everyday intuitions of educators; the observation that children show they are ready and efficient in many different ways and it is difficult to conclude that these ways of being intelligent are due to a single common intelligence to any task. Gardner’s ideas have borne fruit in the United States, in such a way that created schools, educational projects and even school curricula based on this theory and many of them have borne fruit successfully as they have motivated students to develop skills specific and give a particular meaning to the intellectual development of these.

In a very interesting book, Creative Minds (Gardner, 1993) discusses the biographies of famous people attending the argument being fine examples of these types of intelligence applied to artistic or scientific creativity. A Gardner asked to estimate the CI likely to have these characters and said that none of them would get less than 120 IQ score, which means that these characters would be above 90% of the rest of the population regarding general cognitive ability is concerned.

One of the conclusions we can draw from Gardner’s proposal is the importance of interindividual variability in cognitive performance. Where there is a group of individuals faced with specific tasks can see the individual personality emerge in the form of differences in ways of reacting, acting, solving tasks, and, more importantly, this variability is functionally adaptive, not a simple accident of the individual reality.

In a recent interview Gardner recommended “cater to individual differences of children in schools and try to individualize assessment and instructional methods.” Also he insisted on not label children according to their preferences or provisions. According to him, the intelligences are categories to distinguish differences in the forms of mental representations, but are not good categories to identify how they are (or how not) people.